Abstract:
How to find words by their prefix, which can be mistyped, and sort them by frequency stored with the word.

In the previous article, I used DAWGs (called ternary DAGs in that article) for fuzzy search of misspelled words in a spell checker. A similar data structure can help to find words by their prefix, which can be mistyped, and sort them by frequency stored with the word.

When using on-screen keyboard in Firefox OS, the program shows you three most likely words starting with the letters you just typed. This works even if you made a typo (see the right screenshot). 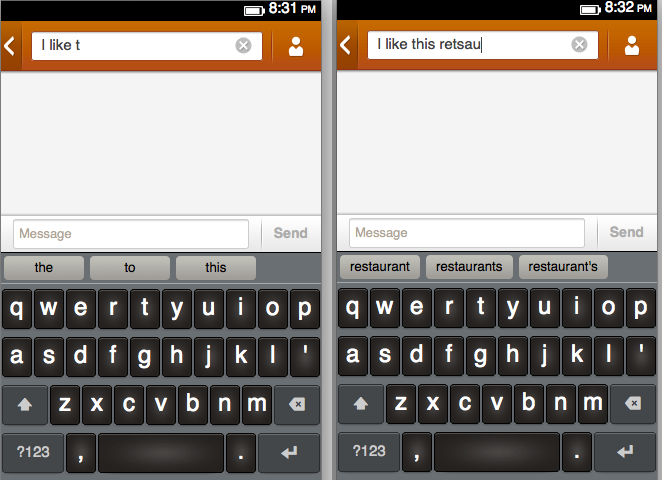 Each word in the dictionary has a frequency associated with it, for example, the top words in the English dictionary are:

For example, if you type “TH”, the program will suggest you “the” and “this” (with frequencies of 222 and 200), but not something rare like “thundershower” (which has a frequency of 10).

Mozilla developers previously used a Bloom filter for this task, but then switched to DAWG and asked me to optimize the program.

Using DAWG, you can quickly find mistyped words, however you cannot easily find the most frequent words for a given prefix. The existing implementation of DAWG in Firefox OS code (made by Christoph Kerschbaumer) worked like this: each word had its frequency stored in the last node of the word; the program just traversed the whole subtree and looked for three most frequent words. To make the tree traversal feasible, it was limited to two characters, so the program was able to suggest only 1-2 characters to finish the word typed by user.

Dictionary size was another problem. Each DAWG node consisted of the letter, frequency, left, right, and middle pointers (four bytes each; 20 bytes in total). The whole English dictionary was around 200'000 nodes or 3.9 MB. 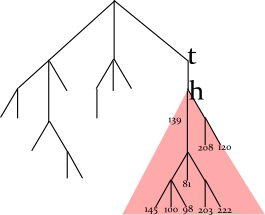 In this example, the program looks up the prefix TH in the tree, enumerates all words in the dictionary starting with TH (by traversing the red subtree), and find three words with maximum frequencies. For the full English dictionary, the size of subtree can be very large.

Sorting nodes by maximum frequency of the prefix

Here is what I proposed and implemented for Firefox OS.

If you can find a way to store the nodes sorted by maximum frequency of the words, then you can visit just the nodes with the most frequent words instead of traversing the whole subtree.

Note that a TST can be viewed as consisting of several binary trees; each of them is used to find a letter in the specific position. There are many ways to store the same letters in a binary tree (see green nodes on the drawing), so several TSTs are possible for the same words: 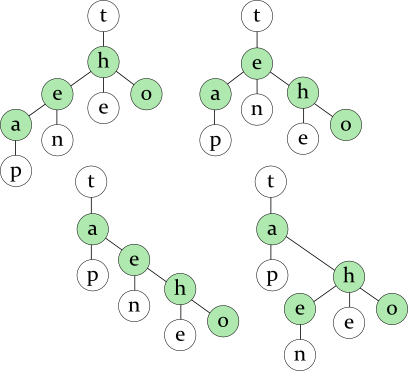 Usually, you want to balance the binary tree to speed up the search (see the previous article). But for this task, I suggest to put the letter that continues the most frequent word at the root of the binary tree instead of perfectly balancing it. In this way, you can quickly locate the most frequent word. The left and the right subtrees of the root will be balanced as usual.

However, the task is to find the three most frequent words, not just one word. So you can create a linked list of letters sorted by the maximum frequency of the words containing this letters. An additional pointer will be added to each node to maintain the linked list. The nodes will be sorted by two criteria: alphabetically in the binary tree (so that you can find the prefix) and by frequency in the linked list (so that you can find the most frequent words for this prefix).

For example, there are the following words and frequencies:

For the first letter T, you have the following maximum frequencies (of the words starting with this prefix): 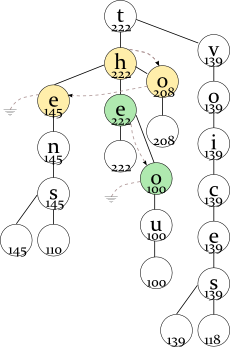 So you have built the data structure described above. To find N most frequent words starting with a prefix, you first find this prefix in the DAWG (as usual, using the left and right pointers in the binary tree). Then, you follow the middle pointers to locate the most frequent word (remember, it's always at the root of the binary tree). When following this path, you save the second most likely nodes, so that after finding the first word, you already know where to start looking for the second one.

Please take a look at the drawing above. For example, the user types the letter T. You go down to the yellow binary tree. In its root, you find the prefix of the most frequent word (H); you also remember the second most likely frequency (208 for the letter O) by looking in the linked list.

and find that TO, not THO is a prefix of the second most frequent word.

So you continue the search from the TO node and find the second word “to”. TE is the next node sorted by frequency in the linked list, so you save it instead of TO:

Now, TE has greater frequency, so you choose this path and find the third word, “ten”.

You can store the candidate prefixes in a priority queue (sorted by the frequency) for faster retrieval of the next best candidate, but I chose a sorted array for this task, because there are just three words to find. If you already have the required number of candidates (three) and you found a candidate that is worse the already found candidates, you can skip it. Don't insert it at the end of the priority queue (or the sorted array), because it will not be used anyway. But if you found a candidate that is better than the already found ones, you should store it (it's possible to replace the worse candidate in this case). So you can store just three candidates at any time.

The advantage of this method is that you can find the most frequent words without traversing the whole subtree (not thousands of nodes, but typically less than 100 nodes). You also can use fuzzy search to find a prefix with possible typos.

Another problem is the file size and the suffixes (such as “-ing”, “-ed”, and “-s” in English language). When converting from TST to DAWG, you can join together the suffixes only if their frequencies are equal (the previous implementation by Christoph Kerschbaumer used this strategy), or you can join them if their order in the linked list is the same and store the average frequency in the compressed node.

In the later case, you can reduce the number of the nodes (in the English dictionary, the number of nodes went from 200'000 to 130'000). The frequencies are averaged only if doing so does not change the order of words (a less frequent suffix is never joined with a more frequent suffix).

For example, consider the same words: 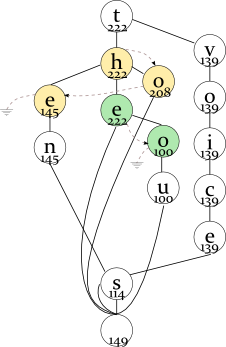 The nodes are joined together only if their subtrees are equal and the linked lists are equal. For example, if “ends” were more likely than “end”, it would not be joined with “tens” that is less likely than “ten”. The averaging changes frequencies, but preserves the relative order of words with the same prefix.

The program is careful enough to preserve the linked lists when joining the nodes. But if the linked lists are partially equal, it can join them. Consider the following example (see the drawing to the right of this text):

Besides that, I allocated 20 bits (two bytes + additional four bits) for each pointer instead of 32 bits. Sixteen bits (65'536 nodes) were not enough for Mozilla dictionaries, but twenty bits (1 million nodes) are enough and leave a room for further expansion. The nodes are stored as a Uint16Array, including the letter and the frequency (16 bits each), the left, the right, the middle pointer, and the pointer for the linked list (the lower 16 bits of each pointer). An additional Uint16 stores the higher four bits of each pointer (4 bits × 4 pointers). After these changes, the dictionary size went down from the initial 3.9 MB to 1.8 MB.

The optimized program is not only faster, but also uses a smaller dictionary. I would like to thank Christoph Kerschbaumer, who implemented the initial version of the DAWG predictive text input, tested and benchmarked my version, tried to write the JavaScript code (which I had to correct), and commited my changes to the repository (I'm very embarrassed that I cannot understand how branching in git works :). I also would like to thank Andreas Gal and Dylan Oliver for giving me the opportunity to work on this interesting task.

Peter is the developer of Aba Search and Replace, a tool for replacing text in multiple files. He likes to program in C with a bit of C++, also in x86 assembly language, Python, and PHP.

Congratulations! Why aren't you referenced anywhere in the new code? The old code comments had the references.

They declined my recent commits and sticked to a simpler data structure (a ternary search tree, not DAWG). One of developers said that my algorithm was too difficult for him to understand :)

Can't wait to have some sort of predictive text, writing text is a nightmare on firefox OS without this. ..

"I'm very embarrassed that I cannot understand how branching in git works" - you are not alone, my friend :D