Let's make an expression evaluator that takes strings like "2 * 3 + 1.5", evaluates them, and returns the result (7.5). The four arithmetic operators and parentheses are allowed in the expression. You can use this simple program instead of your desktop calculator, or you can embed it in a larger application (for example, it can be useful in accounting software).

A popular approach (called recursive descent parsing) views an expression as a hierarchical structure. On the top level, an expression consists of several summands:

Each summand, in turn, consist of several factors (we will call "factors" the things separated by "*" and "/"):

There are 2 types of factors: atoms and subexpressions in parenthesis. In our simple expression evaluator, an atom is just a number (in more complex translators, atoms can also include variable names). Subexpressions can be parsed in the same way as the whole expression (you again found the summands inside the brackets, then factors, and then atoms). 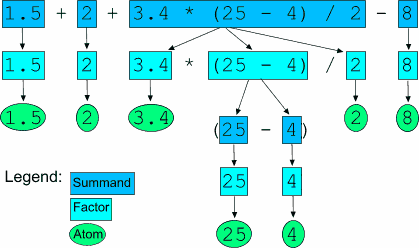 So, we have an hierarchy, where atoms constitute the lowest level, then they are combined into factors, and the factors are combined into summands. A natural way to parse such hierarchical expression is to use recursion:

The hierarchical structure is directly reflected in this code.

Comments to the code

We need to save the operation, because we cannot calculate the result when the second operand is still unknown (e.g., you cannot evaluate "2*3" when you have read only "2*"). The for(;;) loop allows us to parse several summands, e.g., in "1+2+3".

The program uses double data type, which is okay for most applications. If you want to use this code for accounting, you should change to fixed-point data type. Don't use floating-point arithmetic when dealing with money. (If you need an explanation, read about Currency type in Visual Basic 6.0. Also peruse this example in C# and this article from IBM.)

Error handling, parentheses and unary minus parsing are also added to the program below. Only three error messages are used: "parentheses don't match", "invalid character", and "division by zero". When the interpreter sees an unexpected character anywhere, it returns the "invalid character" error code. The position in string where the error occurred is also shown. If there are several errors, only one of them will be reported.

The next part: Code generator

Peter is the developer of Aba Search and Replace, a tool for replacing text in multiple files. He likes to program in C with a bit of C++, also in x86 assembly language, Python, and PHP.

Ten recent comments are shown below. Show all comments

The code and the target are Oberon. Oberon is the language designed to be small and explainable so it's convenient to demonstrate the concepts, and it's not hard to understand.

James Juno, 15 years ago
Excellent and concise introduction. As a trained physicist, I've not spent the time a computer scientist has in this area and this short description has proved invaluable for my current in-house project. Thank you very much!
Mohit, 12 years ago
Nice work. Here is a Java based version of Expression Evaluator on similar lines http://code.google.com/p/xpressionengine/
Xupicor, 11 years ago

Pretty nice, although I like Reverse Polish Notation better. Just combine the RPN expression evaluation algorithm with Djikstra's infix to postfix(RPN) algorithm, and you have expression evaluator that is highly configurable - you can implement whatever operators you want (very easy, just add a new operator with its symbol, precedence, left or right association, number of arguments and function that will process the data), have functions as operators, have variables (very easy to add), strings and string variables (a bit more work, but still fairly easy) and at a bit higher level you can put language constructs like loops.

Voila, you've got yourself a very basic scripting language without ever knowing about flex or bison. ;)

Peter Kankowski, 11 years ago
Thanks, I already did what you described in the next parts of the article.
asim sajjad, 11 years ago

Of all the examples Ive perused, this is the easiest to get your head around recursive descent parsing. Also, I have to mention Game Scripting Mastery to anyone without a deep knowledge of this subject (grammars etc). Look for a torrent on google if you're interested.

You're a star! Thank you!

Superb, clear code, and written as a Class too.

Thank you so much for this extremely clear, concise, simple and VALUABLE article! Thanks to this - and the code you provided - I was able to reverse-engineer a perfectly operational version for BlitzMax in a single day... And I hardly even know any C++! This here is a treasure, and makes it so easy to grasp that I was even able to add exponents into the heirarchy with no bother at all!

I know this post is ancient, but I really appreciate finding your equation solver for C++. I wrote a Python solver for the Mathler Hard Mode puzzle on the internet here in Feb 2022, and it ran 13 minutes. I ported it to C++ but there's no solver utility so I looked around at several and like yours the best. Now the solve runs in 39 seconds:-)

If you happen to see this, thank you for the handy tool I can use for some other puzzle solving perhaps. I'll also study it a bit and learn from it I hope. I modified it very slightly to work as a function inside my main program. Converting my character array to a string usable by your solver took a little learning on my part.

I'm just north of San Diego, California, by the way.